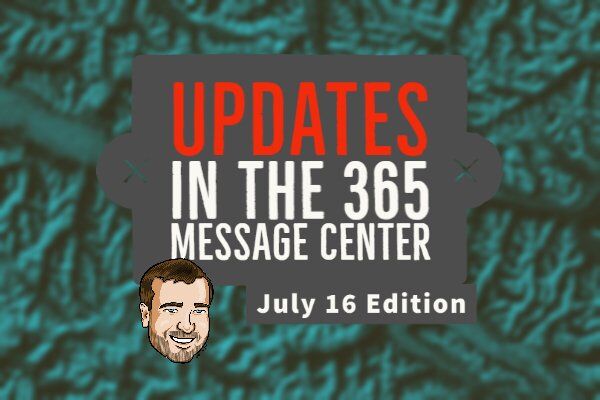 Action needed BEFORE October 13, 2020: A reminder about the changes to Microsoft Office support within Microsoft 365: you must switch to a newer version of the Office clients to continue connecting to Microsoft 365 services. After October 13th, you will no longer be able to connect to services including Exchange Online (email), SharePoint Online, and OneDrive for Business when utilizing Office 2013 or earlier. Get newer versions of Outlook, Microsoft Word, Microsoft Excel, and the rest!

Polls added to Outlook was announced earlier this year and has already been rolled out to Outlook on the web and Outlook for Mac. However, due to Microsoft wanting to “ensure the proper experience” for users, the Outlook for Windows feature has been delayed. While the rollout has begun already, it will not be completed until mid-August.

As discussed on episode #144 of the 365 Message Center Show, the pre-publish overview gives SharePoint page authors information before they publish pages and news. Authors will be shown the thumbnail for the page and details on where it will be published.

The rollout has been postponed a couple months to reduce the amount of change happening in Microsoft 365. It will be available for Targeted Release customers in late-July and will complete for everyone by early August.

As discussed on episode #149 of the 365 Message Center Show, the SharePoint default page templates feature was to give organizations the ability to showcase the default template for each site. However this feature has been completely rolled back and there is no timeline for making it available again in the service.

There was an issue identified that prevented customers from correctly setting what the default template should be in the site. Since the feature had all only been rolled out to targeted release tenants, the rollback will have no effect on standard released tenants. Microsoft is setting the default template for all sites back to the blank template. An updated schedule for when this feature might be coming back to the service will be provided at a later date.

This feature allows your administrators to provide a custom organization logo, disclaimer, and custom display name to the emails users receive showing what email has been captured in their quarantine. The feature will start to be available to Standard release customers mid-July. Government cloud customers will get it beginning at the end of July through mid-August.

Microsoft did not provide information on how to actually configure the customization. They did note that a new quarantine policy PowerShell cmdlet is coming and the configuration can also be done via the Admin Center. The documentation will be provided in the Message Center post when the policy does become available.

Microsoft is consolidating the name of 10 administrative roles across the Microsoft Graph API, Azure portal, and the Microsoft 365 admin center. The roles include Global Administrator, services administrators for SharePoint and Power BI, and User Administrator. The image below, taken from the message center post, shows the different roles and what the new role name will be across all Microsoft 365 services. The renaming will begin mid-August and be completed by early September. You should review your usage of the roles, including if you are using PowerShell scripts that utilize the display name, by August 14th.

Room management will give admins the ability to easily manage Teams room devices within the Teams Admin Center. Another postponement due to all the change happening in Microsoft 365, this update has a revised release schedule. The update should be finished by the end of July, instead of June as previously announced.

Some of the highlights:

Power BI mobile is getting split-view support and the service is integrating with Azure Synapse.

Power Apps will be able to be created directly within Microsoft Teams, there are new AI scenarios for AI builder, and Power Virtual Agents support in Power Apps Portals.