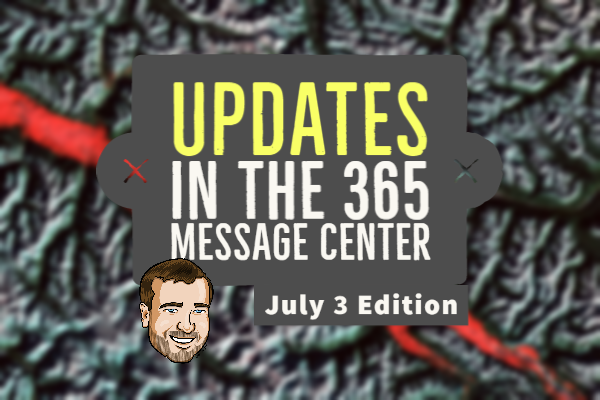 As discussed on the 365 Message Center Show, scheduling pages and news post in SharePoint is a great feature for content management. However on June 29th, Microsoft is rolling back this update and removing it from all tenants. This update caused issues for customers where the posts were not actually being published when scheduled. There is no timeline update for when Microsoft might release this again in the future.

In addition to the ability for users to click unsubscribe, tenant admins will be given the opportunity to opt out for the entire organization via PowerShell. The details for that PowerShell command will be provided ahead of the release on this site: Automatically sending news post digests.

The deployment of the modern managed metadata service in SharePoint was affected by the slowing of all updates into Microsoft 365. Updated on June 23rd, modern admin experience was postponed to start at the end of June and complete in standard release early July. This is a delay of only a few weeks. Modern tagging and filtering has been completely deployed.

Microsoft updated the rollout schedule for enabling basic formatting on the sign in page and it is probably already in your tenant. Originally, it was scheduled to begin rolling out in late June and finish in late July. However, on June 23rd Microsoft updated the rollout timeframe to mid-June and finishing by end of June. This is one of the few instances when Microsoft moved up a rollout after announcing a timeline.

This is another update that fell victim to the rapid amount of changes happening in Microsoft 365. Microsoft is delaying this change by a month. It will now start in July and be completed in August.