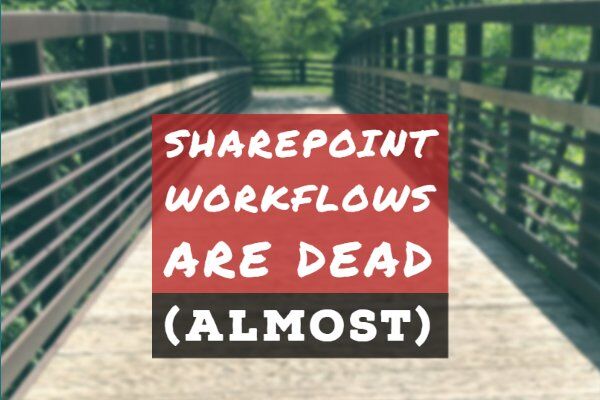 It isn't a surprise that Microsoft is moving to not support native workflows in SharePoint. At Microsoft's Ignite conference in 2016, Microsoft announced that support for SharePoint Designer workflows (and InfoPath forms) in SharePoint Server (on-premises) would in time not be supported. The end of support date was stated to be until 2026. However, the key to those announcements and subsequent blog posts was that they were talking about the on-premises versions of SharePoint Server.

SharePoint 2010 Workflows have been deprecated

If you received this warning when you looked at your workflow page, then your tenant has already been affected. So what is actually being changed? Read on.

What Exactly is Being Removed

Out of the Box Workflows

There are several out of the box (OOTB) workflows that have been available to configure in document libraries and lists for many past versions of SharePoint. OOTB workflows are easily created and maintained within the SharePoint user interface (UI). These workflows include Approval, Collect Feedback, Collect Signatures, Disposition Approval, and Three-state.

These workflows are used widely by power users, developers, and site users. They are configured easily in the UI and because they are OOTB, don't usually fail because of a step that has been configured incorrectly.

When Will SharePoint Workflows be Disabled?

Are 2013 Workflows Being Removed?

So what do I mean by ‘smoothly'? My first requirement for this to be ‘smooth' is if customers don't complain too much. Some customers say less than 4 months notice is far too little time.  This also comes during a global pandemic that has organization budgets stretched thin. There is a UserVoice created with over 1,000 votes and if you feel the notice of change is too short, you can vote there.

My second requirement for this to be ‘smooth' is if removing the workflows is successfully performed and happens without causing issues for sites.

What Do We Do Now?

A good resource to help you get started in the process is Microsoft's support article SharePoint 2010 workflow retirement. The page lists how to identify your workflows, and says you should recreate the workflows in Power Automate.

The first step will be to identify the workflows you have running on your sites using the SharePoint modernization scanner. Second, organizations need to identify which of the workflows in their environment are being used and should be recreated in Power Automate. This second step might take some time if you have been using SharePoint for many business processes in your environment. The third step is to then recreate the workflows in Power Automate. There are five points to go into this process.

That could be a tremendous amount of work. You need to know if you can make progress during the 3.5 months you have before your workflows are disabled.

If you find that you need some help with any of the steps above to meet the deadline, make sure you contact me! Fill-out my contact form and let me help.