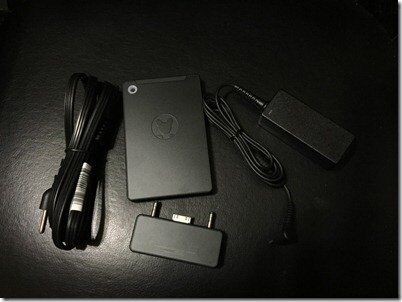 When InFocus announced they were building a PC that was small enough to fix in your pocket, had HDMI, USB 3.0, expand-ability via microSD, and would cost less than $100, I knew I had to buy one.

There has been a tremendous amount [PCWorld] of press coverage [Engadget] for the release [VentureBeat] of the Kangaroo PC, so I won’t do a review of the concept here. This first post is to cover the unboxing of the product and give you an idea of what you get for $99 (NewEgg).

First the box itself – the front and sides are very plain.

The back of the box includes the specs for the PC (at the top) and the model and serial numbers (at the bottom). Once you open the box, the first thing I noticed is the Product Information guide is all in English and was easily understandable. It is not a full User Guide, but you can find that on the manufacturer’s website.

Next the device itself – the Kangaroo PC does indeed come with the dock. I noticed several people on the Newegg page asking if the dock was included – the product page is now updated with a bullet stating the dock is included. The only other accessory included is the power supply cable. As promised, the Kangaroo PC delivers with the following ports (including those on the dock):
MicroSD (storage expansion)
Micro USB (for power)
HDMI
USB 3.0
USB 2.0
Fingerprint reader

I will be hooking up a keyboard and mouse to the PC and starting it soon. My first observations, other than the understandable Product Information guide, is that the PC is heavier and larger than I thought it would be. I had no real information to base my opinion that it would be lightweight and small, but with the descriptions of “pocket-sized”, I was expecting something that could actually fit in a normal person’s pocket.

Read my other post on the Kangaroo: Kangaroo PC Setup and Initial Thoughts