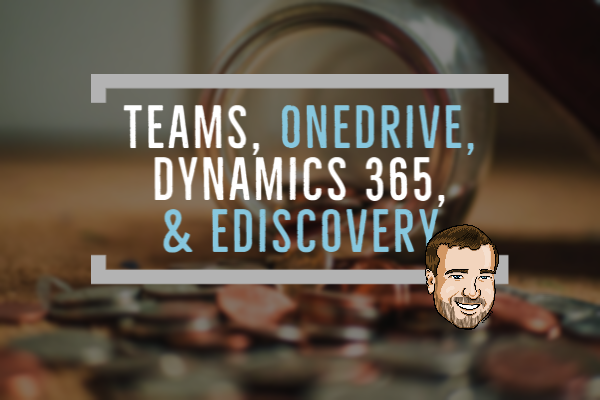 More changes come to Microsoft Teams, OneDrive, Dynamics 365, and eDiscovery functionality in Microsoft 365. These updates have been revised since being announced previously. Keep up with change in Microsoft 365 by reading more below!

Microsoft is working to consolidate the tasks experience in Microsoft 365. Microsoft Teams is getting the revamp treatment, but in phases. A summary is below, but you can read more details in the Tech Community post here: Announcing Tasks in Microsoft Teams public rollout

Right now, in the Teams desktop (and web) app, tasks are called Planner. In the mobile app, they are called Tasks. Then during the new rollout, the name Planner will be replaced with Tasks by Planner and To Do. This rename should be completed by September. Then later this year, the name will be again renamed to simply Tasks. If you are confused, then maybe my diagram below will help. General Availability (GA) should be complete in September. Also of note, this does not apply to government (GCC) or high security clouds.

Originally announced in June, language-aware spellchecking is coming to Microsoft Teams. However, due to the pace of change in Microsoft 365, the feature is being delayed. Instead of being completed in July, this rollout will start in August and finish in September.

This feature will not be rolled out to government clouds (GCC, GCC-H, DoD) yet.

Another feature being delayed because of the pace of change, suggested replies in Microsoft Teams mobile will start soon. Instead of starting in July, it will be released starting in August and completing in September.

This feature allows for users who try to use Microsoft Teams to get an automatic assignment of a license. Announced in May, it was to already be rolled out to standard tenants by now. However, Microsoft has learned some lessons on the process and paused delivering the functionality.

This feature will start to be available in August and completed in September.

As I wrote about earlier this year in my post How to Increase Your OneDrive Storage Limit, you can control OneDrive storage for your whole Microsoft 365 tenant. In that post, I have video demonstration how you can increase a user's storage quota using PowerShell. But soon, you will be able to utilize the Microsoft 365 Admin Center to make those changes.

To make the change, you can open the user details pane and select the OneDrive tab. Then you can select Manage default storage to change the allotment.

This feature should now be in all tenants worldwide.

Changes to Shared Libraries navigation on the OneDrive Website (MC219085)

Microsoft is making a change to how users see shared libraries in the OneDrive site. This feature is fairly new as it is in OneDrive. Shared libraries is a one-stop location for SharePoint libraries to which you have access. Currently, the view looks like the image below.

However, Microsoft will be adding a Shared Library node in the menu where you see My files, Recent, etc. The libraries will not show some of your top libraries in the left-hand navigation (outlined in red above) anymore.

The Message Center post noted that this should be rolled out to Targeted tenants by the end of July, but my tenant does not have this change implemented as of August 1st.

Changes are coming for how Microsoft Exchange, SharePoint, and OneDrive in Microsoft 365 handle records. If you use record labels to declare an item as a record, behavior in the three services will be different.

In Exchange, users will no longer be able to soft-delete an email, nor will they be able to edit the subject, body of the email, or remove attachments.

In SharePoint, when a record is copied, the new item will not have the retention label applied.

For OneDrive, similarly to SharePoint, when an item is copied, the new item will not have the retention label applied. Users will also no longer be able to soft-delete an item.

These changes will start to go into effect in mid-August, and is targeted to be finished for all tenants in early September.

Announced on July 27th and available to all Advanced eDiscovery customers by the end of July, Microsoft is increasing limits in the service. The maximum number of documents that can be added to a case is increasing from 1 million to 3 million. Also increasing is the total file size per load set – increasing from 100 GB to 300 GB. This does include loading non-Microsoft 365 data into the review set.