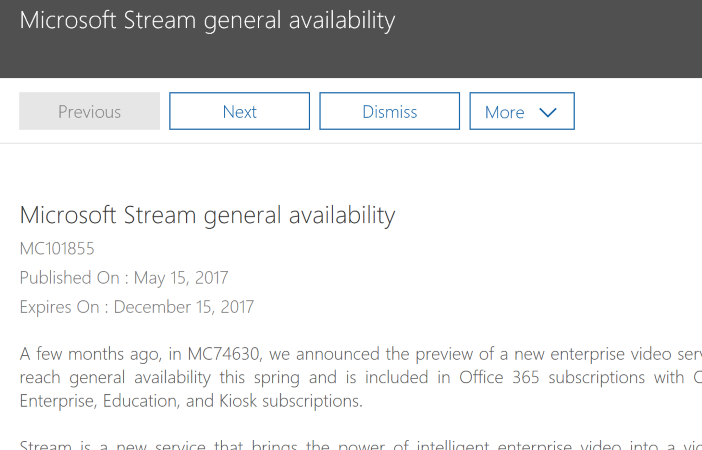 Yesterday Microsoft announced via a message (MC101855) in the Office 365 message center that Microsoft Stream will be generally available soon.

A few months ago, a preview of Stream was announced and you can view more information about the service on the Microsoft's site. The service will be on by default now and will be visible in the Office 365 app launcher.

If you are using Office 365 Video to serve content within your organization, there is nothing you need to do at this time. The move to Microsoft Video will be a phased approach and Microsoft has promised that the move will include all your content and metadata.

After the transition, existing Office 365 Video embed codes and links to videos will still work, redirecting to the same content in Stream.

The full message can be viewed within your Office 365 tenant's message center.

[UPDATE]
Originally, this post made reference to Microsoft Stream being available now. Stream will be generally available soon and another announcement will be made when it is out of preview. Sorry for any confusion the original post may have caused.