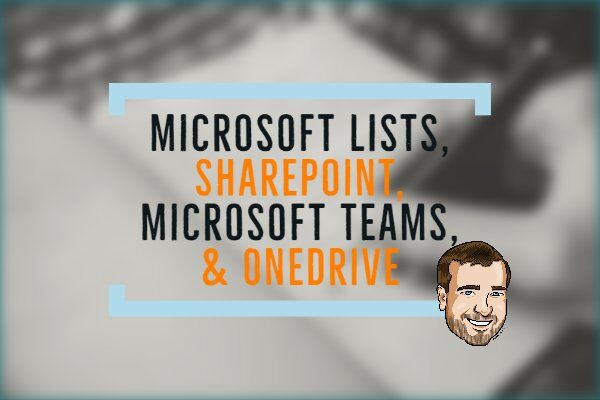 More changes come to Microsoft Lists, SharePoint, Microsoft Teams, and OneDrive functionality in Microsoft 365. These updates include new features and revisions of features since being announced previously. Keep up with change in Microsoft 365 by reading more below!

Microsoft is clarifying two points around the new Microsoft Lists. First, the rollout will take longer than most rollouts we have seen lately in Microsoft 365. It has already started rolling out to targeted release tenants, but it won't be completely rolled out to all tenants until mid-October 2020.

Secondly, Microsoft wants you to know there is no way for you to turn off Microsoft Lists for your tenant. However, you will be able to disallow users from creating personal lists. This will be done via PowerShell and the feature will be rolled out sometime in September 2020.

As I reported previously, Microsoft pulled the feature allowing the scheduling of pages and news posts due to an issue. However, the issue has now been fixed and the rollout started back this month. Your tenant probably already has the feature, but it is turned off on sites by default.

What to learn how to enable this feature and allow your users to start scheduling posts? Check out my short video explaining how:

Announced in June, cumulative analytics will give hub owners the ability to see analytics on activity within all sites in the hub. Microsoft has delayed the rollout of the new features, originally slated to be implemented in July. The target was end of August, so it may already be in your tenant.

Microsoft wants your users to stay informed by making sure they see published content. “SharePoint Auto-News Digest sends automated email to users in your company about the latest News posts that they have not yet read that are relevant to them.” Content that a user doesn't have access to will NOT be sent and the emails are sent weekly. Microsoft will allow users to unsubscribe from these emails. There will also be way for admins, via PowerShell, to turn the feature off altogether.

The feature has been delayed until early September and Microsoft has promised that the admin controls will be available before rollout.

Coming in September, when moving files between SharePoint and OneDrive, users will be able to keep the sharing settings on files. “Move and keep sharing is a new feature that allows your end users to easily re-share a file with all the direct collaborators (e.g., the users who had previously received a share for that file) should it be moved.”

This is a great new feature that allows document continuity when moving. This will work for files moved from one SharePoint site to another, from SharePoint to a OneDrive site, and from OneDrive to a SharePoint site. The rollout starts in August and is expected to be completed by the end of September.

This update is all about unifying the file sharing experience across Microsoft Teams, SharePoint, Office, and OneDrive. It is a boost in user productivity that they will have the same user interface for sharing across all the sites/apps.

However, Microsoft has delayed this rollout to reduce the amount of change happening. The new timeline is for rollout to begin late August and be completed in late September 2020.

The rollout of the new calling and meeting experience has completed for users to opt-in, however there are delays in the schedule for enabling by default. The new schedule has the features being enabled by default in late August. Users will be able to opt-out of the features until sometime in September, when Microsoft will disable the opt-out feature.

This is the previously announced feature that allows you see the content that is automatically disposed or via a review. You can view the items in the ‘Disposition’ section of the Records Management solution within the Microsoft 365 Compliance Center.

Microsoft is removing the ‘Discover' view from OneDrive. This change has already started rollout and will be completed by the end of September. If you have trained your users to use this functionality, you need to let them know that Microsoft now suggests using search for this functionality – although I don't agree that search will fill this same need.

Also be aware that Microsoft will also be removing the Shared libraries section as well. As announced in July via MC219085, the libraries will not be shown in the view, but users will have to clicked on a new “Shared Library” node.

Announced in June, this feature will allow you to save your settings in the Outlook desktop application to the cloud, so that it syncs across your devices. The rollout has been delayed due to issues identified during the early rollout stages to early rings. The expected rollout is now scheduled for the production Monthly Channel in late September.