I created a new Office SharePoint Server 2007 Web Application a few months back and moved our existing sites around to create a new structure in the new Web Application. I did this to move all the project sites under one ‘roof' and get things more organized. At the time, we were a little behind the curve on patching SharePoint. We were on version 12.0.0.6327, which is SP1 plus the August 2008 Cumulative update.

While doing some research (see Technet Forums and Odole blog), I ran across several sites saying this was a known issue that is fixed in the February 2009 Cumulative update (for MOSS and WSS 3.0). I was told by Microsoft support after contacting them (see below) that the root cause is ACL corruption when the sites are moved.

After installing Service Pack 2 (for MOSS and WSS 3.0), and the latest Cumulative update (February 2010), the issue was not resolved for existing sites; but I expected this behavior. I contacted Microsoft support to obtain an executable (not publically available) that would fix the existing sites. After running the executable, the existing sites were all fixed and when I created a new site, it did not have the issue.

A screenshot of the fix program in action: 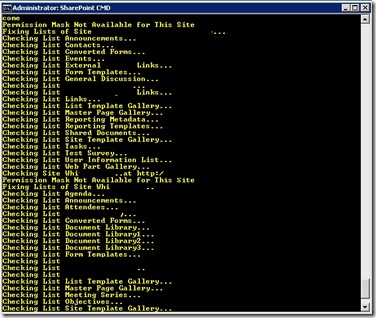